Back to the Cave

In the days when the “Miller’s Cave” portion of JMC50 was active, it was decided that we needed a good promotional picture of the band.  So we somehow hired a local Rolla photographer, Bradford and Fitzsimmons, to do the job.  One hot and humid summer day we packed into a car and followed the photographer out to a site that he said was perfect.  It was the entrance to a small cave, and we remember walking through the woods, uphill, to get there.

Unfortunately, that’s all we remember because, as much as we’d like to revisit that spot, no one has a clue as to where it is.

Enter (JMC’s tenor sax player) Bill Meeker’s daughter, Paula, some 49 years later.  In her recent visit to Fort Leonard Wood, she actually found a cave named “Miller Cave” when hiking on the base.  She took some pictures of it and asked JMC50 if it looked familiar. Well, we know that we didn’t take the picture at Fort Wood, and that cave looks a bit bigger than what we remember, BUT with modern technology, we can still make it happen!

As a result of her find, and a little photographic manipulation, we now have an official picture of JMC50 playing at Miller Cave!  While some might say that we look older, we consider it as looking “more experienced” (see the photo below).  Besides, we have some second generation members that couldn’t possibly have made the first picture! 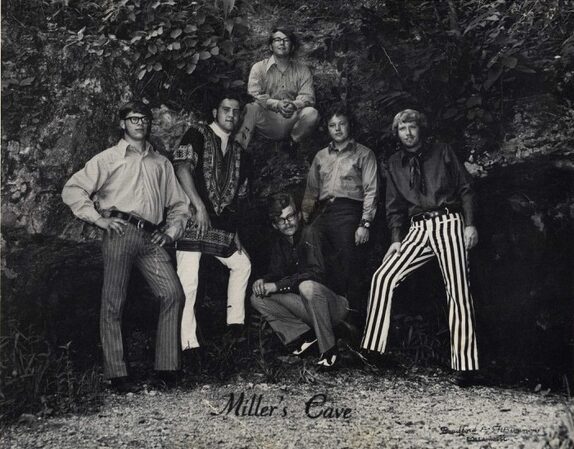